This traditional cottage garden favourite is a beautiful flower that you will find in many British gardens as well as in huge drifts in the wild. Originally hailing from the Mediterranean  They are a perennial that will greet you with a gorgeous display year after year. Not a hugely long-lived perennial expect them to last in a British garden for around 6 years, they can last much longer in perfect conditions, however. They produce a large flowering spike that is full of colour and each plant can have lots of these spikes leading to a fabulous display. They will begin to flower around may and can last well into June. The flowers do go to seed quite quickly but your lupin will continue to produce more and more new spikes. To get the best out of these spikes though it is essential to behead the old spikes to give the new ones chance top flourish.

The vibrant colours of the beautiful flush of flowers are known to attract flocks of birds and butterflies, just one of the reasons they are a cottage garden favourite along with other staples such as delphiniums. Russell lupins are the most common variety found in gardens these days, this variety is more resistant to slugs, snails and other pests while still providing gorgeous lupine flowers. 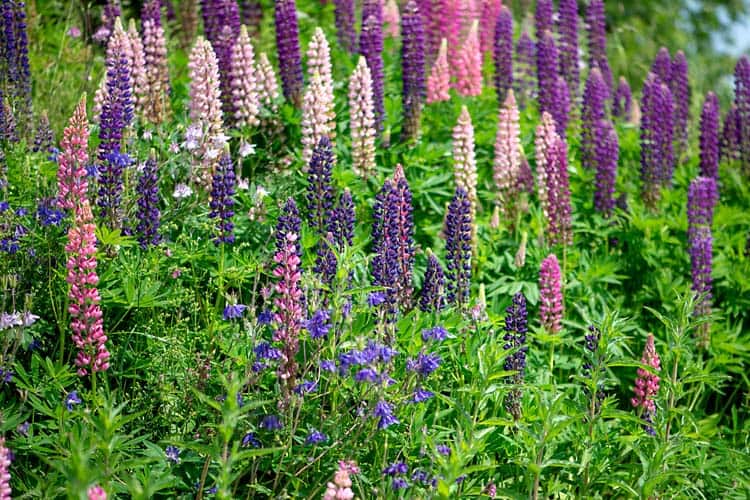 How to deadhead lupins

First, locate the dead spike, they are really easy to spot as the flowers will have turned to pods. This will happen a few weeks after flowering all the way up into the autumn. They look like furry pea pods. You then follow the stem down to where they meet with some new growth and snip! Use a pair of sharp secateurs, scissors or a sharp knife to dead head your flower spike leaving the leaves well alone. You can continue to deadhead your lupins throughout the summer.

While obviously not needed to deadhead lupins we have a great article testing , check it out here if you are planning of pruning anything large!

Leaving some spikes to seed

If you want some seeds to sow some new lupins then you can tactically leave some spikes that have gone to seed. You can then harvest these seeds later in the season to grow fresh lupin seedlings. Lupins are perennials so saving the seed pods is not essential. They have a strong taproot which can survive in the soil over winter then burst back into life in the spring stronger than ever. Due to these strong roots, you can rely on your lupins coming back year after year. However, they are not the longest-lived perennial which is why many gardeners do like to harvest the seeds, grow fresh seedlings and have some succession planning in mind.

Some gardeners also transplant lupins and break up the roots as this can reinvigorate them setting them up for future growth. This method is called plant division and can be done with both garden grown and container grown lupins.

As gardeners, we deadhead any flower to prolong its flowering season. By design, a plant will begin to put its energy into creating seed rather than flowers once it has had one good display. We want to avoid this as much as possible and to extend their flowering time. By taking away the dead flowers which are turning to seed we take away the plants ability to put its energy into the seed.

The plant will then focus on creating new blooms as this is its only way now of creating seed. You can repeat this cycle to extend the flowering season by months. The flower spikes of this cottage garden plant make it easier than most to deadhead as the flower heads are all in one place.

Should you deadhead lupins?

What to do with the deadheads

You can chuck them on the compost heap or if you aren’t lucky enough to have a compost heap yet then they can go in your garden waste bin or be tucked away in a hidden spot in the garden and left to rot.

Thanks Daniel, explained in simple terms for me to understand

Hi, am no sure if my flowers are lupin, they are almost 6 feet

Hi Brenda, Do you have any photos?

Thanks this was very helpful from an armature gardener